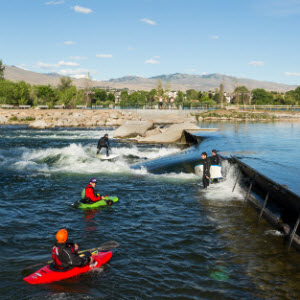 Boise, Idaho, has had another year of growth. New restaurants, wineries, and breweries and expanding attractions have kept visitors on their toes — or rather, on their feet exploring what’s new. On your next visit to Boise, be sure to visit these sizzling new hot spots.

Need to jump to start your morning? Neckar Coffee has been a Boise Farmer’s Market staple, serving artisanal coffee from a mobile cart. But the popular cart recently launched a brick-and-mortar shop in downtown Boise. In addition to serving affogatos and yogurt bowls with house-made granola, Neckar carries pastries from the James Beard-nominated Janjou Patisserie, the only location outside of Janjou’s own store to sell the popular treats.

Ready for a quick lunch between conference events? Try Tasso, a gourmet deli in the BoDo district of downtown Boise. Chef Dan Carruthers designs seasonal menus of sandwiches, soups, and deli selections made entirely from scratch. That includes everything from the mustards spread across artisanal breads to the cured meats on the mouthwatering sandwiches.

Eager to find some fusion? Madre is a boutique taqueria in Boise’s Lusk District. The chef is a James Beard nominee who brings his flair for experimentation to the Boise restaurant scene. The restaurant serves tacos, “not tacos,” beer, and wine. In addition to the daily menu, it hosts a monthly pop-up dinner where participants can experience a special tasting menu with wine pairings.

Want a taste of the Old West? Diablo & Sons is a polished, saloon-like atmosphere focusing on tacos, beer, and mezcal. It’s the newest project from the Boise restauranteur who owns the popular Bittercreek Alehouse and Red Feather Lounge.

Want to stay in? Guests of the newly renovated Grove Hotel, locals, and visitors all can experience fresh culinary creations at breakfast, lunch, and dinner from Trillium. This new restaurant focuses on showcasing sustainable, locally sourced ingredients in an upscale but approachable atmosphere.

Looking for local flair? Family-owned Meriwether Cider opened Boise’s first cider house in downtown, just blocks from the convention center. The Cider House features Meriwether’s own Boise-brewed ciders, as well as ciders from around the world, on its 20 taps and in its coolers of 30 to 40 bottled ciders.

Ready to sip something new? Hops & Bottles opened its beer bottle shop last summer in Boise’s Linen District. In addition to its variety of beers on tap, it has 15 coolers filled with more than 370 beers, ciders, and Idaho wines to drink in the space. The owners celebrate a collection that includes local, regional, international, and rare brews.

Need to let off some steam? Base Camp Pong & Axe is a new bar and restaurant concept for Boise. The restaurant is near Boise State University. The veteran bar owners want their patrons to be entertained while enjoying drinks and food prepared by a Michelin-starred chef. The entertainment includes pingpong and ax throwing.

Want to move around? Boise has had bundles of new breweries popping up over the years — each with its own local style. Boise developers launched the Boise Ale Trail app so visitors can explore 20 participating breweries; check locations, hours, and brews on tap; and even claim prizes after logging visits.

Ready to learn? Boise has expanded the Anne Frank Human Rights Memorial along the Boise River Greenbelt. The new, 940-square-foot pavilion adds a covered space to the Anne Frank Memorial. Additionally, the site has full audiovisual capabilities to help visitors touring the memorial, as well as meeting space and new artwork.

Want to dive into history? After a four-year closure and $17 million in renovations, the Idaho History Museum has officially reopened. The new museum features 18,000 square feet of exhibition and educational space with an overhaul of all exhibits. This will create a whole new experience for viewers in the completely renovated original museum building in Julia Davis Park.

Itching to get outside? The J.A. and Kathryn Albertson Family Foundation Whitewater Park includes two controllable waves and additional whitewater features created by boulders and rocks for surfers and kayakers to enjoy near Esther Simplot Park and Quinn’s Pond. Local shops allow for equipment rentals of kayaks and paddleboards for those who are traveling without their gear, and guided lessons are available for those testing out the water sports for the first time. Other options include beautifully landscaped, interconnected paths around the park.