Recreation
30 minutes away
On 16 June 1900 work began on creating access to the top of Tibidabo, with the building of a tram - known popularly as the “Tramvia Blau” (Blue Tram) - and a funicular railway. At the same time, at the top of the mountain, work continued with the landscaping and construction of buildings and terraces. On 29 October 1901, the new facilities were officially opened. Interestingly, the funicular railway turned out to be the first main attraction of the Amusement Park, due to it being an innovative means of transport at that time. That same year, the first leisure facilities also appeared - such as the automatic scales and postcard vending machines. The first decade saw the introduction of small attractions such as telescopes and binoculars, swings, the Flobert shooting gallery, bowling, mirrors, automatons, the carrier pigeon station, along with events of all kinds: including Clavé choirs, military bands, orchestras and balloon rides. New buildings were opened such as the Gran Café Restaurant Tibidabo and the Hotel Restaurant Coll as well as a large events hall, within which they tried, unsuccessfully, to open a casino.
Plaça del Tibidabo, 3-4
Barcelona, ES 08035
Visit website

Recreation
15 minutes away
Over 3000 workers were commissioned to work on the project and less than 1 year later the magic fountain was born. The magic fountain of Montjuïc's (Font màgica de Montjuïc in Catalan) first performance was on May 19, 1929 during the Great Universal Exhibition. The designer Carles Buigas submitted his plans one year before the exhibition and many thought that the project was too ambitious to be created, let alone completed on time. The magic fountain is a spectacular display of colour, light, motion, music and water acrobatics - if you mix these elements together in just the right combinations, you end up with pure magic! The magic fountain is a "must see" when you come to Barcelona and highly recommended.
Avda Reina Maria Cristina
Barcelona, ES 08008
Visit website

Historical landmark
5 km away
The Basílica i Temple Expiatori de la Sagrada Família is a large Roman Catholic church in Barcelona, designed by Spanish architect Antoni Gaudí (1852–1926). Although incomplete, the church is a UNESCO World Heritage Site, and in November 2010 Pope Benedict XVI consecrated and proclaimed it a minor basilica, as distinct from a cathedral, which must be the seat of a bishop.
Carrer de Mallorca, 401
Barcelona, ES 08013
Visit website

Recreation
25 minutes away
Güell wanted to recreate the British residential parks, which is why he named it Park Güell, in English. Gaudí respected the vegetation that was already growing on the property, such as the carob and olive trees, and when new species were introduced, he opted for Mediterranean plants that did not require much water. He also designed various systems for collecting and storing water, based on the irrigation systems he had learned about in the rural setting of his childhood. Both the vegetation and the management of the water resources thus helped to prevent the erosion of the land caused by the heavy Mediterranean downpours, while at the same time helping to provide the water needed by the estate’s inhabitants.
Carrer d'Olot
Barcelona, ES 08024
Visit website

Shopping
Las Ramblas is often the first landmark that most tourists identify with the city. It is the central most boulevard which cuts through the heart of the city centre and is a vibrant and lively promenade filled with Barcelona action at its best. Las Ramblas is approximately 1.2 kilometres long with Port Vell (near the cruise port terminal) at the Southern most end and Plaça Catalunya at the northern most end.

Recreation
20 minutes away
Barça's new stadium replaced their old ground of Les Corts which with a capacity of just 48,000 was too small to accomodate the interest generated by a team led by Hungarian star Ladislao Kubala. The stadium was designed by architects Francesc Mitjans Miró and Josep Soteras Mauri, with the collaboration of Lorenzo García Barbón, and it was constructed between 1955 and 1957, using mainly concrete and iron. The whole project cost a staggering 288 million pesetas, which meant the club would spend the following years heavily in debt. Although it was originally going to go under the official name of ‘Estadi del FC Barcelona’, it soon came to be popularly known as the 'Camp Nou' (the ‘new ground’), as opposed to the club’s old home at Les Corts. It was not until the 2000/2001 season that, following a postal vote made by the Club membership, that the decision was made to make ‘Camp Nou’ the official name of the stadium. Of the 29,102 votes the club received, a total of 19,861 (68.25%) preferred Camp Nou to Estadi del FC Barcelona. The stadium’s maximum height is 48 metres, and it covers a surface area of 55,000 square metres (250 metres long and 220 metres wide). In accordance with UEFA stipulations, the playing area has been downsized to 105 metres x 68 metres. With a capacity of 99,354, it is now the biggest stadium in Europe. However, the total capacity has varied over the years owing to different modifications. When it was first opened in 1957, it held 93,053 spectators, which would be increased to 120,000 in 1982 on occasion of the FIFA World Cup. However, the introduction of new regulations outlawing standing areas reduced the stadium’s capacity in the late 1990s to just under 99,000. In the 1998-99 season, UEFA recognised the services and facilities at Camp Nou by awarding it five star status. In the whole of Spain there are only four other stadiums that can claim that, the Lluís Companys Olympic Stadium, also in Barcelona, the new Cartuja Olympic Stadium in Seville, the Vicente Calderón, home of Atlético Madrid, and the Santiago Bernabéu, also in Madrid. Of the different facilities on offer inside the stadium, of particular note are a chapel next to the changing rooms, the presidential box, the VIPs lounge, the press rooms, several television studios, the Sports Medicine Centre, the Operative Control Unit (UCO), the veteran players area, the FC Barcelona club museum, and the offices of all of the many different Club departments.
Carrer d'Aristides Maillol, 12
Barcelona, ES 08028
Visit website

Historical landmark
4 km away
The Palau de la Música Catalana was built between 1905 and 1908 by the architect Lluís Domènech i Montaner as a home for the Orfeó Català, financed by popular subscription. The Palau de la Música Catalana is an architectural jewel of Catalan Art Nouveau, the only concert venue in this style to be listed as a World Heritage Site by UNESCO (4th December 1997), which today represents an essential landmark in the cultural and social life of Catalonia. Moreover it represents a symbolic emotional heritage for a whole people who identify with its history.
C/ Palau de la Música, 4-6
Barcelona, ES 08003
Visit website 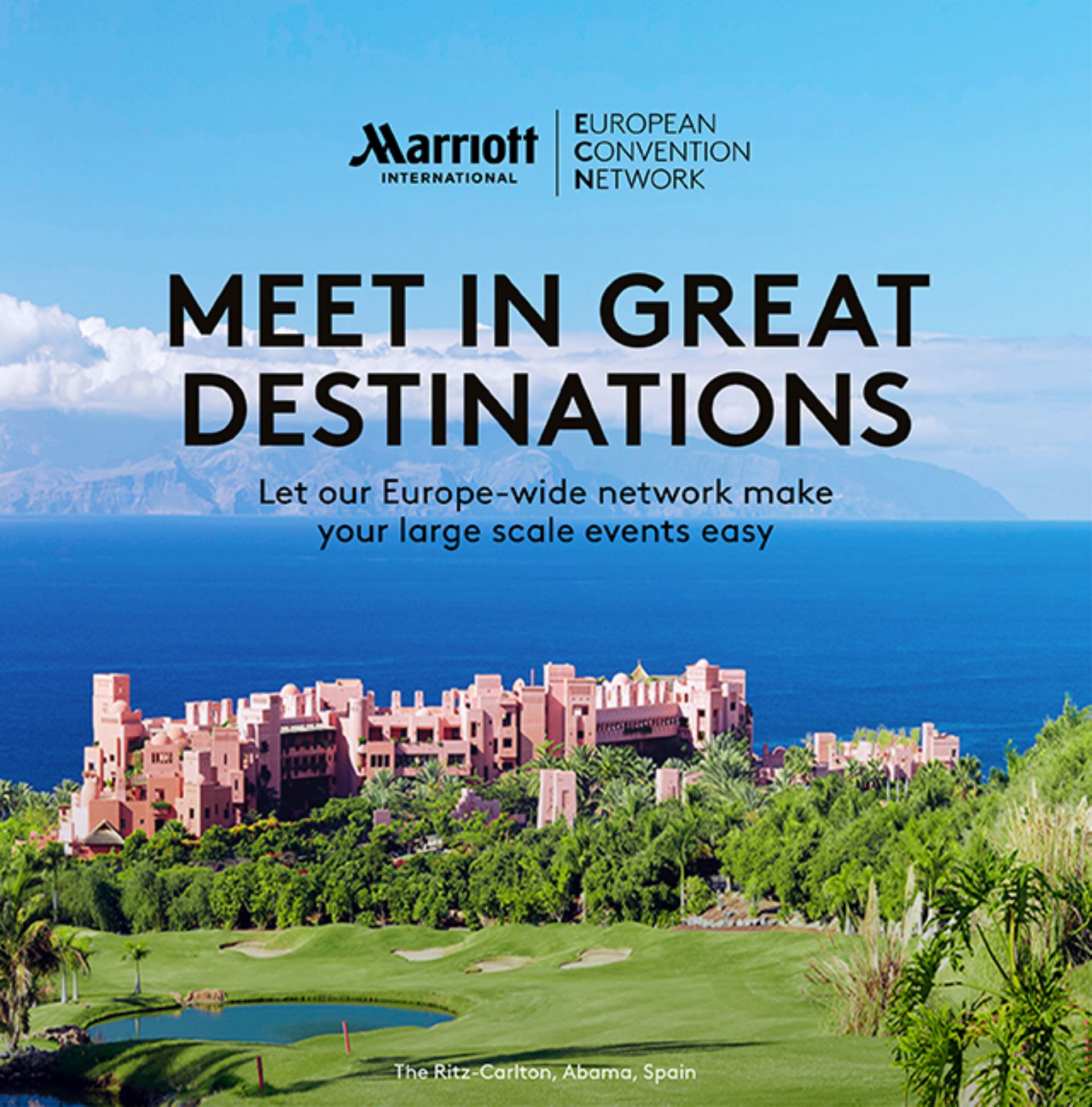 Marriott European Convention Network
26 of Marriott's largest conference hotels and resorts in Europe, to make the sourcing of your large events easy.

W Barcelona is a flagship hotel for the W brand. We opened our doors in 2009 and in order to ensure that we retain our position as a leading lifestyle hotel, we have undergone a complete renovation of our guestrooms in 2016 and our top tier suites in 2018, offering a new and innovative design to our guests. W Barcelona enjoys a privileged location, being the only hotel with direct beach access and beach club. With 473 guestrooms, we have the ability to host large groups and offer buyouts. The only difference between each guestroom is the view and how high it is located, otherwise, in terms of size and décor, all guestrooms are the same. In addition, because the hotel was built on reclaimed land, every guestroom benefits from exceptional views of the sea. What differentiates us from the other hotels in Barcelona? In terms of function spaces, our 10,000 sq.ft. Great Room features a floor to ceiling window with stunning views of the Mediterranean. Combined with our 14 breakout rooms and 5 terraces, we are perfect for conferences of all sizes. In addition, W Barcelona features 6 F&B outlets including, but not limited to, a Michelin star restaurant, a rooftop cocktail lounge and beach club. Perfect for incentive trips, as we also have 3 pools, 2 of which are outdoors and 1 indoors, part of our new wellness and fitness area, GETAWAY and FIT.