As societies gradually re-emerge back into the world, marketers will begin to shift their attention from purely online to a blend of offline and digital.

Effective offline campaigns pre-covid included experiential - the strategy of engaging an audience through direct interaction with a brand and / or its products.

With humans unable to even greet each other with a hand-shake or a hug, it’s still hard to envisage a time when we’ll return to using all five senses to experience participatory brand campaigns at festivals, shopping centres, high-streets or at live events.

However, just as in-person events will return, so too will all the clever, creative, technology-driven, weird and wonderful branded goings-on that makes experiential marketing such a memorable and effective medium for driving loyalty, awareness and purchasing decisions.

Here’s five of my own personal favourite brand experiences to inspire and reignite creative campaign planning for the future.

In December 2016, drinks band Orangina leveraged the well-known annoyance of seeing a drink get stuck in a vending machine by aligning it with its long-term product message of shaking the bottle to wake the drink (thus ensuring the orange pulp is sufficiently mixed).

When unsuspecting passers-by tried to buy a can of Orangina, the drink would get stuck in the machine every single time.

To offer them a helping hand, a screen on the machine lit-up and informed the thirsty customers that they needed to shake it. The dispenser was specially made to be easy for people to move it around.

Once the machine was satisfied it had been shaken enough, the caught-up drink was released.

In 2009, Volkswagen gave Swedish commuters a musical surprise by turning a subway staircase into a giant piano when nobody was looking.

The next day, each step produced the sound of a different piano key as people climbed up and down the stairs.

The campaign was a part of ‘The Fun Theory’, which suggested people would be more likely to use the stairs rather than the escalator if the experience was fun.

For Volkswagen, it was about getting people to consider adopting healthier habits such as buying more environmentally-friendly vehicles.

Unfortunately, with the Volkswagen emissions scandal occurring six years later, the core brand message may be tainted but the principle of adding fun elements to live experiences for memorable results remains strong today.

Marketing takeaway: Find people where they already are and change everyday behaviours by adding fun elements

You can’t talk about experiential marketing without mentioning Disney.

Walt’s imagineers are the masters of bringing Disney brand characters to life and creating engaging memorable experiences throughout its theme parks and brand activations.

In 2016, Disney produced a heart-warming surprise experience for Singaporean children as part of its ‘Disney Junior Magical Moments’ campaign.

Using Augmented Reality, Disney set-up a screen opposite a bus shelter on a busy street in Singapore, which appeared transparent, just showing the road ahead. However, when children arrived to sit and wait for their bus, they were greeted by some of their favourite Disney Junior cartoon characters.

Beloved characters from Mickey Mouse Clubhouse, The Lion Guard, Sofia the First, and Miles from Tomorrowland, appeared on the screen, as if they were standing right there on the street.

The children could dance and interact with the characters, whilst their parents filmed the experience on their phones.

One last surprise was in-store when the real Mickey Mouse made an appearance to complete the magical brand experience.

In 2017, Paramount Pictures promoted the sequel to horror movie, The Ring by taking over an electronics store in New York City and giving customers a scary experience.

In the above video, customers are given an in-store tour of the TVs, all showing a trailer for Rings before an actress, dressed up as the petrifying young girl from the film, crawls out from one of the screens and gives customers a fright they won’t forget in a hurry.

The activation was created by fitting a false wall in the shop and covering it with the TV screens.

Hidden behind a screen on the bottom row was a small compartment where the actress hid, before the screen covering her was lifted.

Marketing takeaway: Transform the space for maximum impact and use theatrical talent 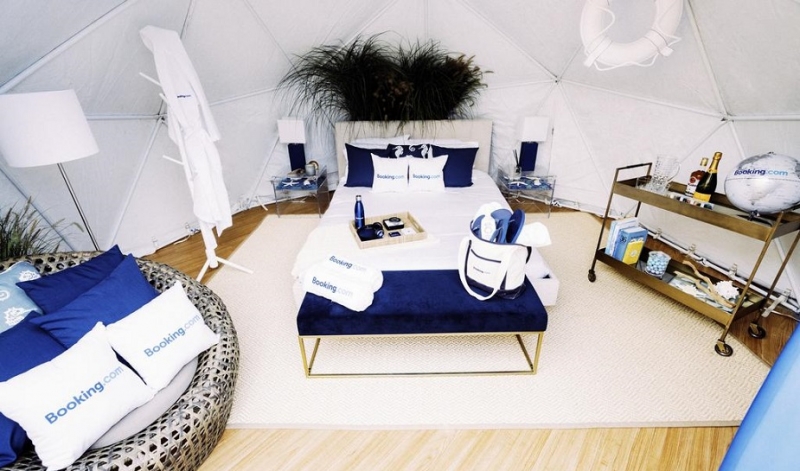 In 2019, a Booking.com survey revealed that 43% of respondents were interested in staying in an accommodation type they’d never experienced before.

In response, the digital travel operator gave holiday makers the opportunity to stay in a truly magical accommodation - a huge sandcastle.

Available for just $29 a night, the Booking.com holiday home was located directly on the beachfront and was crafted from almost 100 tonnes of sand on Coney Island, Brooklyn.

The ‘SAND’-sion was created in time for National Sandcastle Day on 19 August and paid homage to the annual Coney Island Beach Sand Sculpture Competition.

Created by sand sculptor Matt Long, the structure stood at eight-feet high and 18-foot-long and was supported by an interior structure to combat any fears over safety.

Inside, the SAND’-sion was kitted out with top-of-the-range amenities and Booking.com branded accessories including beach bags and headphones.

Mike has been writing about the meetings and events industry for almost 20 years as a former editor at Haymarket Media Group, and then as a freelance writer and editor. He currently runs his own content agency, Slippy Media, catering for a wide-range of client requirements, including social strategy, long-form, event photography, event videography, reports, blogs and ghost-written material.
More articles from Mike Fletcher

The Ultimate Guide to Safe Meetings and Events for Venues

Finding Venues in a Post-Pandemic World and RFP Tips

Set Up a Twitter Live Stream at Your Next Conference