Meetings in Grand Southern Style at The Peabody Memphis

80,000 square feet of meeting space, 464 rooms, and 5 marching mallard ducks …. what makes the “South’s Grand Hotel” in the “Blues City” the perfect 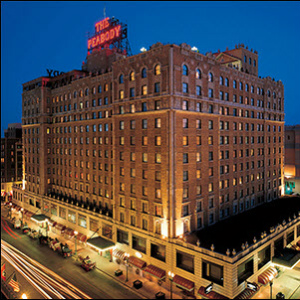 destination for your meeting.

The Peabody Memphis opened in 1869 as a symbol of the South's rebirth. Named for philanthropist George Peabody, it quickly became the business and social hub of Memphis. In 1925, The Peabody was rebuilt at its present location on Union Avenue and continued to host presidents, celebrities, socialites and prominent business professionals.

In the 1933, General Manager Frank Schutt returned from a hunting trip and mischievously placed his live duck decoys (legal at the time) in the fountain at the center of the hotel’s lobby.

A few years later, the hotel hired Edward Pembroke, a former circus animal trainer to teach the five North American mallards to walk to and from the fountain each day, and one of the South’s most charming traditions was born. The March of the Peabody Ducks takes place every day at 11am when the Duckmaster leads his five mallard ducks down the elevator to the fountain in the Grand Lobby. A red carpet is unfurled and the ducks march through the crowd to John Philip Sousa’s “King Cotton March.” The ducks remain in the lobby until 5pm, when the ceremony is reversed and the ducks retire to their rooftop penthouse for the evening.

Offering 80,000 square feet of newly-renovated meeting space, The Peabody can accommodate groups of 10 to 2,100. The 36 function spaces range from stately, wood-paneled conference rooms with fireplaces to the 1930s Art Deco-styled Skyway. The Peabody Rooftop offers breathtaking views of the Mississippi River, making for a picturesque sunset reception. Meanwhile, the Continental Ballroom and adjacent Louis XVI room feature ornate crown molding offering an elegant setting for any occasion. The 16,000 square foot Grand Ballroom can be divided into six convenient breakout rooms. In addition, the Peabody Executive Conference Center recently completed a full renovation to feature 12 private, luxury meeting rooms on an exclusive floor. The Grand Ballroom, Peabody Executive Conference Center and all of the historic meetings spaces were renovated in 2016.

Legendary for its charm, elegance, and gracious Southern hospitality, The Peabody Memphis is a Memphis landmark, is on the National Register of Historic Places and, after more than 145 years, continues to carry the distinction of the “South’s Grand Hotel.