Make the Setting of Your Next Meeting Inspirational: Make It Boston 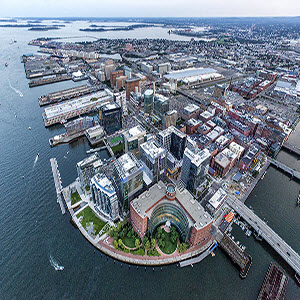 Boston is one of the most dynamic cities in the world, thanks to its rich network of colleges, world-class research hospitals, biotech infrastructure, life-sciences startups, and fertile ground for venture capital. The city incubates innovation, and events hosted in Boston absorb this spirit. The city also fosters robust conversation. Planners can expect the Boston's undercurrent of innovation to influence their sessions, panels, breakouts, and plenary events.

Boston has three convention centers, all located in unique neighborhoods teeming with iconic venues for offsite meetings and events. The Back Bay is known for its signature skyline and Victorian architecture, and it is home to the John B. Hynes Veterans Memorial Convention Center. Over 3,000 hotel rooms are connected to the Hynes, with almost 8,000 rooms within 1 mile. A stellar addition will arrive in early 2019 when the Four Seasons at One Dalton Street opens its doors, adding 211 guest rooms to the Back Bay inventory and indelibly changing the city’s skyline. Cultural gems across the Back Bay and its adjoining neighborhoods are perfect for a memorable event — the exquisite courtyards at Boston Public Library and the Isabella Stewart Gardner Museum, the Dell EMC Club at famous Fenway Park, the sweeping views offered at Skywalk Observatory, and the resonant Museum of African-American History, where Frederick Douglass spoke at the African Meeting House in 1860.

While the Back Bay was created in the 19th century, Boston is still creating new neighborhoods in the 21st century.  The South Boston Seaport District, anchored by the 2.1-million-square-foot Boston Convention & Exhibition Center (BCEC) and the Seaport World Trade Center, is Boston’s emergent neighborhood. The Seaport is home to Boston’s Innovation District, where startups, co-working spaces, and organizations such as Mass Challenge and District Hall drive innovation. The BCEC has embraced the movement with the Lawn on D. Located adjacent to the BCEC, the Lawn on D is an eclectic landscape of quirky public art, immersive festivals, and experiential events that integrate conference attendees into Boston’s cultural community. The Seaport is full of vibrant venues for team-building and offsite events: the distinctive galleries and beautiful waterfront patio at the Institute of Contemporary Art, Abigail’s Tea Room at the Boston Tea Party Ships & Museum, the Beer Hall at Harpoon Brewery, the diverse studios at the Artists for Humanity Epicenter, and the multitude of new restaurants and entertainment venues now open at One Seaport. The Seaport District will add about 2,000 guest rooms over the next few years, notably with the 1,054-room Omni Hotel opening across from the BCEC.

Plan your next meeting in Boston. The Greater Boston Convention & Visitors Bureau will assist with all your needs. Encourage attendees to maximize leisure time and bring their families to explore our beautiful and historic port city.

Event Planning for the Future: 6 Things to Consider

Rebuilding Your Event Program After A Crisis