Imagine a destination truly of the place, a big city with a small-town feel. Welcome to Louisville, the city of unbridled possibilities surrounded by inspiration in every direction.

Louisville carved out a space for bourbon, horses, and big hats while maintaining its Midwestern charisma and Southern grace. Powered by sips of mint juleps and the triumphant spirit of Kentucky Derby jockeys, Louisville sets the scene for high-impact conventions and conversations by being itself.

While you may know the infamous Bourbon Trail, Louisville created the Urban Bourbon Trail®, a collection of bars and restaurants with a distinct bourbon culture, to celebrate its undeniable cache of bourbon. With a third of the world’s bourbon production within Louisville’s city limits, favorites such as The Galt House Hotel are among the many stops along this boozy pathway.

From panoramic views of the city at the future location of Swizzle to brunch on the Belvedere at Walker’s Exchange, Louisville is flanked by up-and-coming restaurants discovered in century-old buildings. Its signature Southern taste, mixed with joyful bits of hospitality, reflects the love Louisville has to share. Plainly speaking, every bite is mouthwateringly good. 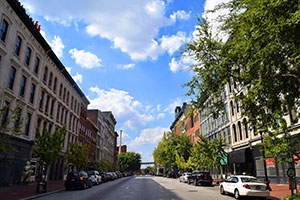 The Arts and Museum Scene

Louisville is home to many champs, including Muhammad Ali, whose legacy lives on at the Muhammad Ali Center on Museum Row. Down the road are other “heavyweights,” including the Louisville Slugger Factory and Museum. As the art and museum scene continues to boom, there will an emergence of artist-in-residence programs that combine both aspects of the experience.

When planning, apply a fresh lens by drawing inspiration from the surrounding area. In the heart of the exciting resurgence along the Ohio River lies a beloved historical landmark, The Galt House Hotel, known as Legendary Louisville®.

The hotel is taking the reins on the momentum flowing through Louisville and serving a well-crafted cocktail of graceful hospitality on a grand scale. Deliver unexpected moments with a Legendary Louisville® stamp of approval while discovering the unbridled possibilities of Louisville.

For more information, contact Lance George, director of sales and marketing at The Galt House Hotel, at 502-569-4475 or [email protected]. You can also visit these websites for more information about the hotel and its renovations.