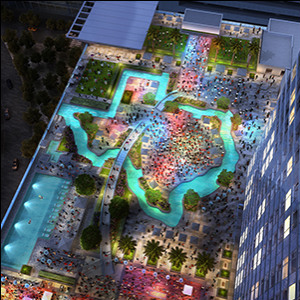 As the latest hotel to join the Avenida, the city’s epicenter for art, dining, entertainment and fun, the hotel adds 52 meeting rooms and over 150,000 square feet of flexible event space to the downtown Houston convention campus. As one of two hotels connected to the George R. Brown Convention Center via an air-controlled skywalk, guests can also enjoy easy access to conference showrooms.

Within its 1,000 guest rooms, the hotel offers Marriott’s signature bedding and modern –in-room technology to keep even the busiest business traveler relaxed. But what’s a room without a great view? A one-of-a-kind Texas-shaped lazy river, rooftop infinity pool, and special events pavilion overlooking the 12- acre Discovery Green Park establish the Marquis Houston as a cosmopolitan oasis in the heart of downtown.

It’s no wonder they were named among ConventionSouth’s 2017 Annual Readers’ Choice Awards winners and one of Houston's few AAA-Four Diamonds rated hotels. In essence, the Marquis Houston is a hotel where convention attendees will want to stay just one more day.

For those eager to experience Houston like a local, guests don’t have to travel far. In fact, housed within the Marriott are six food and beverage outlets, including Biggio’s two-story sports bar, a signature cafe, and wine bar, and Xochi helmed by James Beard award-winning chef Hugo Ortega. Just outside, Avenida Houston serves as a gateway to excellent cuisine from land and sea, with over 15 dining options in the immediate vicinity.

The hotel is only steps away from entertainment and sporting events, including the BBVA Compass soccer stadium, Toyota Center and Minute Maid Park, home of the 2017 World Series Champions Houston Astros. However, high-octane sporting events are only a fraction of what downtown's programming has to offer. From free concerts and parties on the Avenida plaza to festivals and free movies at Discovery Green, the surroundings of Avenida Houston provide a variety of things to do.

Learn more about the Marriott Marquis Houston and Avendia Houston by visiting www.AvenidaHouston.com. You can also find out what’s happening in the Avenida through Facebook, Twitter and Instagram.

Risk Management for Event Planning: What to Do When a Crisis Strikes